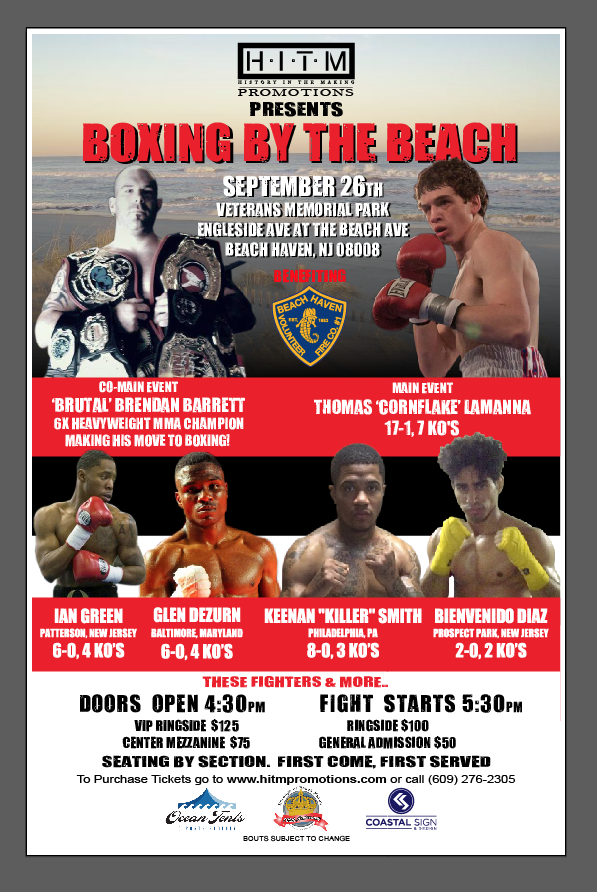 Beach Haven, NJ (September 21, 2015) – HITM Productions, will be presenting their first boxing match, Boxing by the Beach, Saturday, September 26 at The Veteran’s Memorial Park in Beach Haven, LBI, NJ.  The event, held under a tent in the park, will go on rain or shine.

This inaugural event will showcase some of the greatest talent in boxing from all over the globe.  “It is an honor and a pleasure to have such great athletes competing on our first show, and we are very excited to bring boxing to Beach Haven,” shared HITM Productions.

Fighters slated for Boxing by the Beach are as follows:

When asked about how he felt about the event, “Brutal” Brendan Barrett shared, “It’s been almost a year and a half since I’ve been able to fight and over six years since I last stepped foot into a professional boxing ring. I feel truly blessed to be able to fight on an event that is sure to leave its mark on local history.”

Doors open at 4:30pm and fights will commence at 5:30pm with famed announcer David Diamante taking to the ring.  Tickets can be purchased at www.hitmpromotions.com or at the following retailers: The Chicken or the Egg (Beach Haven), The Ice Cream Shop of Manahawkin or Jon Miller Car Care Center (Tuckerton). Seating is first come first served. Food and beverages will be provided by Shorty’s of Tuckerton. Music for the event will be provided by DJ Marc V, with the help of MK Productions.

For more information on the event go to www.BrutalBrendanBarrett.com