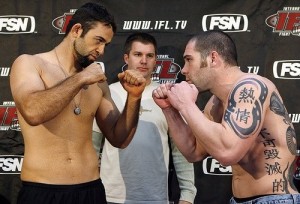 On April 5th, Brutal Brendan Barrett will be seeking his fourth consecutive Heavyweight Title at the legendary Ring of Combat at the Tropicana  in Atlantic City, taking on Silvao Santos from Brazil.  Having made his debut with the Ring of Combat in 2007, and having launched his fighting career in Atlantic City, Brendan is looking forward to returning to AC … and  claiming the ROC Heavyweight Championship belt on April 5th!

CMG is proud to be a sponsor of Brendan’s upcoming Ring Of Combat fight, and happy to have  the opportunity to share his story, as he moves into the final weeks preparing for this important fight.  We’ll be there supporting him in Atlantic City on April 5th…and encourage anyone interested in attending one of the top events in professional fighting to join us in supporting this truly inspirational fighter who continues to be a role model both in and out of the ring!

Brendan’s road to becoming a professional fighter began back when, as a senior in college, he found himself recuperating from serious injuries sustained from a car accident … and reflecting on what truly made him happy in life.  Due to his injuries and recuperation, he withdrew from college (where he had been double majoring in accounting and business, with a concentration in finance) – and was faced with the decision of what to do next.  In thinking of what made him truly happy, he kept coming back to one thing: competing.  A long-time athlete and competitor, Brendan had excelled in sports throughout his life – playing soccer, baseball, tennis, track, rugby, football and his favorite, wrestling.  As he recuperated and worked hard to overcome the injuries he sustained from the car accident, Brendan realized how much he missed competing … and decided to find a sport to fill this void. After much soul-searching, he decided to start training and competing in mixed martial arts … a decision that changed his life, and led him to an exciting career, and success, in the world of MMA fighting.   His first fight was a pro fight … and he hasn’t looked back since!

“After my accident, I gave some serious thought as to what makes me the happiest, and I realized that, for me, it was competing in an individual sport,” says Brendan, who, in addition to excelling in high school sports went on to compete in wrestling on a collegiate level.  “With individual sports, what you put in is what you get out, and MMA was a good fit to allow me to push myself physically to excel in competition.”

Brendan quickly went on to train hard, capture numerous major titles – and become a major force in the world of professional Mixed Martial Arts fighting.  Although he did go on to finish college and receive his Bachelor’s degree, he chose to continue to fight – and currently holds the Raging Warrior Heavyweight Belt, the Locked in the Cage Heavyweight Belt, the XFE Heavyweight belt, is a two-time NAGA World Grappling Champion, Heavyweight and Absolute Division Champion of the Rhino Open Grappling tournament and an IFL and Ring of Combat veteran.  He has recently won all three titles, in three consecutive fights, for three different MMA promotions – and has also set his sights on the world of professional boxing.

Through his experience in overcoming injuries early on in his career (as well as overcoming subsequent injuries in the years to come), Brendan stresses the importance of training both physically and mentally for each fight.  For the upcoming fight, as with all of his fights, he notes that he is “loading up on calories, getting enough rest and upping his cardio.”  In addition, he stresses that his training/preparation is often more mental – and being “mentally ready” for each fight.

“I believe that mental state is more important than physical state when fighting, and my goal is always to stay mentally focused as I train and be mentally ready as I enter the ring,” he notes.  “Focusing on my goal is always important for me as I train.  Not only does this mental focus help me prepare for each fight, but it has helped me to recover from injuries and allow me to overcome obstacles throughout the years.”

In addition to his leadership, and success, in the world of MMA, Brendan is also making a difference when it comes to helping others.  A long-time animal lover, he is involved in animal rescue and helps in any way he can.  In addition, he has served as a speaker at numerous events for many different causes – and was recently involved in an anti-bullying program, as well as a self-defense program for girls.

“The bigger the spotlight I have, the more I am able to help others,” he notes.  “Without anyone else having helped me along the way, I couldn’t have accomplished the things I have done, and I want to make sure other people have the same opportunity.”  In addition to his philanthropic work, Brendan also frequently is involved in fundraising activities for local causes and people in need.

We’ll be rooting Brendan on as he takes the spotlight in Atlantic City on April 5th – and are, once again, proud to be sponsoring him as he fights for the Ring of Combat Heavyweight Belt.  For more information about the fight, or to order tickets, visitwww.ringofcombat.com.

Make sure to check our website and Facebook page for more information as we get closer to the fight – including details about a special “post-fight” party being planned for Saturday night, April 6th at the Foundation Room in the Showboat Casino with DeeJay Vito G. (mention Brendan Barrett’s name at the door for reduced admission!)